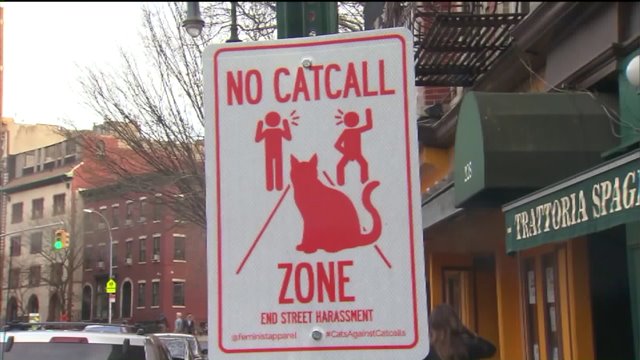 I don’t often get political on social media, which is why I thought that this would be a good place to do it. You made the conscious effort to get to this page, so now I don’t feel bad about forcing my thoughts onto you. In reality, this isn’t even as political as it is about general human decency. Anyway, while I was in Vegas last week, my cousin and I experienced a lot of new, weird, and surprising things. But I have to say that the thing that stood out to me as the most shocking was the amount of catcalling that went down. To clarify, no, catcalling is not a form of compliment, and no, it actually doesn’t make women feel better about themselves. Personally, it made me feel worse. It made me more body-conscious. Like I was always being looked at and commented on. Catcalling is a form of sexual harassment that some seem to think they can disguise as a compliment that will somehow result in a woman completely stopping what she’s doing to give them what they want. I’d love to know the success rate of catcalling. Has “Daaammmnn girl yeaahhh that’s what I’m talkin’ about” ever worked for anyone, ever???

The thought that women should appreciate catcalling implies that it’s done out of respect. It suggests that when some random guy yells a disgusting comment at a woman walking down the street, he is brightening her day. He is not. On our trip, it felt weird even having an encounter with a male who didn’t make an inappropriate comment, and I even felt like I should have thanked them, as if they were doing me a favour by not disrespecting us. The fact that I felt more genuinely happy on the day that I was wearing boyfriend jeans instead of shorts, even though it was hotter than the Sahara Desert out there, just because it cut the catcalling in half, is unfair. The fact that my cousin and I had to even think about the fact that we might get too much uncomfortable attention in certain outfits when we were getting dressed in the morning or for the night out is unfair. We made jokes the morning that we drug our hungover asses to In-N-Out about how no one would be bothering us for once on the walk there. We were right. Next time we’ll just wear sweatpants and leave last night’s fake eyelashes mysteriously tangled in our hair for the whole trip.

A few days in, we thought of the brilliant idea of making a video where girls say things like “DAMN would u look at that, girl whatchu doin later??” or “mmmmm that’s what I want” to random guys walking down the street and see how they react. We didn’t do this, sadly, but someone definitely should. I wish we would’ve kept a tally of how many times we were catcalled over a 4 day period, because your minds would all be blown. And I 100% do not mean this in an “omg me and my cousin are so perfect and hot the men would not leave us aloneeeeeee hehe” type of way. Trust me, there were multiple times where I genuinely wished I had been wearing a garbage bag because maybe then I wouldn’t have to feel like some object that people could look at and comment on in disgusting ways as we walked down the street. But I packed cute outfits so I was going to wear them. For MYSELF so that I could stare at my reflection in buildings when I walked by.

It’s just such bullshit that females have to literally just take this or try to ignore it. There were times that I said something back, but honestly it just got tiring after awhile. So instead, we let them comment on how we looked, and kept walking. But when I really realized how wrong this whole thing was, was when I snapped back at two guys who were thanking me for turning around and “showing them the view they wanted to see” as if I was turning around specifically to do them a favour. Maybe my cousin called my name so I was turning to her but idk????? Anyway, I snapped back at them, but then a few minutes later I felt bad for being a bitch. But I told myself they just caught me at the wrong time – I was super hangry. I was the rude one in the situation, even though they had just very publicly disrespected me.

I know, I know – life is unfair. I’m just saying that it’s really unfair that women and girls everywhere have to experience this every day. It’s unfair that men can say anything they want in passing, and nothing will be done about it. It’s unfair that females have been so conditioned to think carefully about what we put on our bodies because we might draw the wrong kind of attention. It’s unfair that before my cousin and I left for our trip, our parents had to tell us to be careful because two young, pretty blondes might be targets for things much worse than simple inappropriate comments.

Am I opposed to compliments? Not at all. I love getting compliments, and I love giving compliments. I think it’s important to boost other people’s confidence. You’re in love with that girl across the store’s outfit? Tell her! It’ll make her feel so good. Tell that girl that her makeup looks flawless, cause she probably worked hard on that winged eyeliner and would love some recognition. Tasteful compliments are where it’s at. But am I opposed to being told that I look like someone’s dessert they’re gunna have later? Yup. More than a little.

Getting back home to my boring little city was somehow still a breath of fresh air. I haven’t been catcalled in ten days and it’s been amazing. And I’m genuinely sorry to all of the men out there who aren’t complete dicks, because you are sadly still tainted by those who are. And I’m even more sorry to all of my fellow females who have felt this feeling before. You’re absolutely perfect, but in more ways than the ones that were shouted out to you on the street.